This was a good day for science for me and my companions as we spent this day mostly in the Technical Museum. I liked the Neo-Baroque and Art Nouveau styles building  and while getting closer I was wondering what can be stored in a four flours that big building. I was about to find out that in Vienna the kids are comming at the Technical Museum to spend time with friends – it’s like a place to go out. At the first flour we 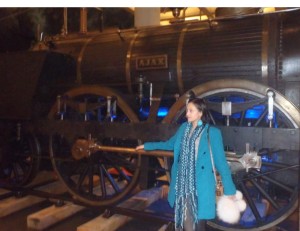 had to beat with kids in order to recreate the elementary school phisics experiments. Everything was so interactive with clear action items and obtaining the desired results was fun. This aproach could change the way children perceive science. Moving forward, I had the change to see on a screen my EKG. On a studio just like the one for weather forecast, I had the chance to see the backgrounds changed behind me. I only saw this before in MTV videos making of. The next flour exposed train vagons and locomotives. I was so enthusiastic to see all that, maybe because the train played an essential role in my life, as my dad is a railway employee, all my 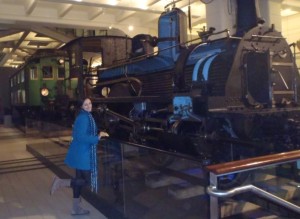 childwood I crossed the country from South-East to North-West by train, going to the mountains, to Bucharest, in different trips, visiting all my relatives across the country. Two times I even had the chance to drive the train along with my father on the locomotive. As a child, this was awesome! And I relived all those nice memories in the Technical Museum. It was exposed there even the luxury wagon used by Sisi in her travels.
We saw here not only wagons, but also cars, motocycles, bikes, boats and a helicopter.
The tour continued with the evolution of different home appliances – washing machines, vacuum cleaners and so on.
There was also a window that stored the oldest sewing machine and the next ones until the models existent today. I really enjoyed to see this.
The journey continued with robots, so many different types and models, presented cronologically.
The last flour was the multimedia one, here I can take a bow for the next gen technology. I played the role of a news presenter here for a few minutes.

In different windows there were exposed smartphones, tablet

s and all the new technology.
After checking the souvenirs shop, where I felt like a child again, we turned to a nice place to eat and we choosed Einstein. I had here the best Gordon bleu ever and Radler beer was quite good. The restaurant is very authentic, it’s just like Caru’ cu Bere in Bucharest. After the great meal, a walk is the best choise, so we crossed the street to the Rathaus X-mas fair. We bought here another round of souvenirs. Later in the evening we went back to the apartment satisfied that we had another lovely day in Vienna.

1 thought on “Forth Day in Vienna”

This site uses Akismet to reduce spam. Learn how your comment data is processed.